Grateful people are happy people. Love the simplicity present in this thought. This guy radiates so much joy. It's contagious. I feel like I want to immediately know him...hug him...share some snacks. :-) He's absolutely right though-the more grateful I am, the more I'm taking time to acknowledge the gifts that are present around me.

Steindl-Rast speaks to what I call "gratitude practices." You can even think of them as active meditations, but these practices are things/structures/ideas set in place that keep us grounded, thankful, and open.

I challenged myself some months back to start some kind of morning ritual to get my days started off in a much better feeling way. Typically I would just roll over and grab my phone, get on facebook, ingesting other peoples bullshit status updates and energy that ultimately started my day in a haze of "meh" and "grrrr." That shit wasn't working! My challenge to myself was to do anything but reach for that phone!

The first installment of this challenge was to not leave my bed-not even put one foot on the floor-until I had spoken aloud 5 things that I'm grateful for in that moment. What began to happen was pretty damn amazing. I was leaving the bed so aware and appreciative of the people in my life, the things that I have, and the opportunities that are presented to me. Even small things like a bangin' box of cereal that I know is waiting for me in the kitchen-I left my bed SO excited about my life.

This "challenge" became a mainstay in my life. I've now extended it to a bedtime ritual as well. To quiet myself and the dumbness of the day, I don't close my eyes until I've spoken aloud 5 things that I'm grateful for. I go to sleep with gratitude and I wake up with gratitude. Feels way better than "meh" and "grrrr."  :-)

My biggest takeaway from this establishing of rituals is that our internal space is sacred. We should honor it and treat it as such. We're worth waking up and feeling great. We're worth gliding through the day joyfully, smiling from ear to ear. Why not?

What's your practice? What's worked for you? Leave a comment and let me know what your gratitude practice is. I'm curious. Maybe I can add on to mine :-)
Posted by Unknown at 9:01 AM 1 comment:


Recent write up about my practice here in the city!! Thanks to Charles D. Springfield for the love. Stay tuned for follow up posts with tips about how to navigate dating with a bit more meaning in the city.

What are you exchanging?

I've been having a problem with stank face as of late.  Stank face, also known to some as resting bitch face, is a problem for many. Most people know me as a super smiley, joyful kind of guy but lately that has not been the case. I've just not been feeling people, my job- kind of life in general- and it's been manifesting in every interaction I have. I've been getting into squabbles with damn near everybody, and even had a sit down with a manager about my attitude sucking. Things just haven’t been the cutest.
In a recent what I like to call "sit yo' ass down" moment, I had to do some internal inventory and check myself. What emerged in this stillness was a deep focus on what I was doing to contribute to all of this madness. What’s my role? What am I offering? Then I had my Oprah “Aha” moment: every interaction that we have is an exchange of spirit, of energy, of life. Every single interaction. Whether it be person-to-person, getting on a crowded subway car, or sitting in stillness at the park, some part of us is moving with, moving next to, or exchanging with a part of another being; it's a handoff of energy. This image of two massive, vibrating, energetic fields came to me. They were all pixels-no defined images-with a really warm, glowing, pink hue. They were happy fields. They met, vibrated with each other, hi-fived, and each of them removed a piece of themselves and offered it up to the energy force in front of them, adding to and changing the components of their fields, respectively. Maybe that’s exactly what happens with us. We meet another person, and whether it’s anger or joy or heaviness, we remove a bit of those “pixels” and offer that up as our contribution. The other takes it in.
It seems obvious, but just stick with me here: no one wants to feel shitty. No one wants to have aggressive, exhausting, draining interactions with the world around them. We fall short because we’re not always consciously aware of what we’re offering. If I’m presenting my anger to someone, like it’s a gift, why would they want to give me their best, most “feel good” parts? I wouldn’t want to. What would happen if your contribution or offering was one of love and light? What do you think people would offer you in return? 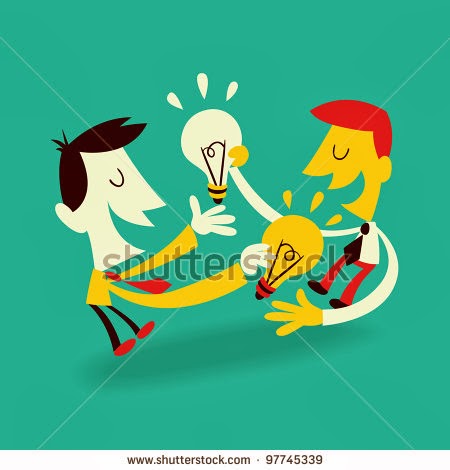 I conducted an experiment last night at work to be conscious of my contribution in every exchange. I set an intention to actively give joy, love, and light.  I did that and boy was it returned! Just a little backstory and contextual information about my job here- I work at one of the busiest, craziest restaurants in New York City. I bartend. People are reckless. People want what they want and they want it now- not in two seconds- NOW. Think of a bar, three rows deep, and everyone is Veruca Salt from Charlie and the Chocolate Factory. That’s my job; it’s fast, physically demanding, emotionally draining, and it goes hard nonstop. Don’t get me wrong, we have our fair share of awesome people, but they sometimes get lost in the sea of scalliwags and ragamuffins.
Now, back to my experiment. I set the intention to give joy, love, and light. Literally every guest in my section was awesome and if they weren't, they moved to a table after about 20 minutes. It was great. I had a section full of sweethearts all night. I felt like I was BFFs with most of my guests. We were chummy, they were chummy with each other, they were patient and having fun, we were talking about music and life- just rad people. I was even invited out to two vineyards in Napa because of these great exchanges. Despite being swarmed with guests, sweating, and having no break from the chaos, I had amazingly beautiful interactions all night.
So what am I saying? Is the secret to smiling from ear-to-ear just saying to yourself, I’m going to give joy and love tonight? No. I don’t think it’s that easy. Setting an intention was great for me, but I also had to remind myself of that intention several times. The night was one big active meditation. There was focus on my breathing; I recited my intention like a mantra a few times; I would sometimes just ask myself before I spoke to someone, “what are you exchanging here, Eric?” It was a bit more involved than just stating an intention at the beginning of the day.
To bring it all home, I just want to revisit my learnings from all of this: no one wants to feel badly. I also want to add that I don’t think anyone actively wants to cause other people distress. I’m choosing to give people a bit more credit and to lean into the inherent awesomeness that I believe we all have. Perhaps for some, it’s a bit more protected and not exchanged as freely, but I believe it’s possible to access that awesomeness if my “come from place” or vibration/intention/inner dialogue-whatever you choose to call it-is that of love and light.
What are you allowing to be exchanged? What’s the cost of not being aware of it? I challenge you to be conscious of who you want to be and how you want to be in your dealings with life around you. I guarantee that you will see a difference that feels much better. The only thing you have to lose is feeling shitty. If it doesn't work for you, shoot me a message and tell me what your experience was. I’d love to hear about it. Mine was rather profound, so I'm fairly confident that yours will be as well.
Posted by Unknown at 8:04 AM No comments: